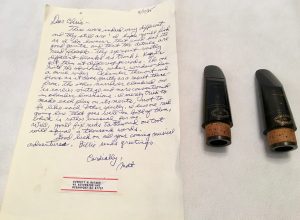 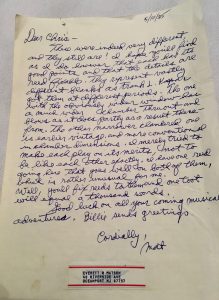 Such a rare and historical opportunity doesn’t arrive often, so why not treat yourself to these renowned &  special mouthpieces and find the magic qualities  these iconic mouthpieces can provide the clarinet player with

These two Kapsar “Ann Arbor.Mich” mouthpieces belonged to, and were used by Chris King, formerly Principal Clarinet of the Ulster Orchestra. They can be heard played on many of the orchestras fine recordings

They are  in excellent condition, both mouthpieces were relayed by the legendary mouthpiece guru Everett Matson, especially for Chris.

As there is provenance (see letter in photos)  relating to both mouthpieces I would prefer that they are sold together. You can read Mat’s own findings on their potential in the letter to Chris, letter will be included with the mouthpieces

Please contact me if you require further information or photos