As a solo performer, Andrew has had several pieces written for or dedicated to him. Below are details of a couple of them. Click on the images for larger versions. 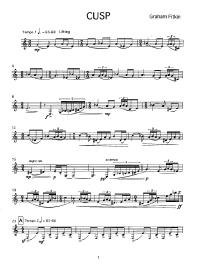 Graham Fitkin was born in Cornwall in 1963, and studied at Nottingham University and the Koninglijk Conservatorium in Holland. He has been commissioned to write works for, amongst others, the RLPO, the BBC Philharmonic Orchestra, the Apollo saxophone quartet, the RSNO and Kathryn Stott. Graham wrote this piece for Andrew in January 1997. The dedication page can be seen here. Kenneth Hesketh is a native of Liverpool, and had already had works of his performed by the RLPO by the time that he went to study at the RCM in London. While there, he wrote his first formal commission for them, entitled Harlequin. He was the Leonard Bernstein Fellow at Tanglewood in 1995, and completed a Master’s degree in composition at the University of Michegan. He has written for Sir Simon Rattle and the Birmingham Contemporary Music Group, and has a commission from English National Opera Studio for a chamber opera. This piece, for clarinet and piano, was written in September 2001.