I remember the excitement I felt hearing John Fuest warming up on stage before a concert with Royal Liverpool Philharmonic Orchestra when I was around 12 years old (he had previously been Principal Clarinet with the City of Birmingham Symphony Orchestra). After hearing his wonderful playing on many occasions at the Phil, I eventually gathered up the courage to talk to him on the platform after a concert.

John was such a charming and friendly gentleman as he enthusiastically showed me his new Buffet clarinets, that I was inspired to continue my clarinet playing and to try to have some lessons with John in the future.

Some years later John came to hear a concert, in which I was playing with the Cheshire Youth Orchestra, his daughter Janet was playing violin in the orchestra. John was very encouraging about my playing and was interested in my crystal mouthpiece at that time, a lifetime’s interest in mouthpieces is one of my most endearing memories of John!

Both Janet and I went on to study at Chethams School of Music and I performed on several occasions with Janet and kept in touch with John. Later, whilst attending the RNCM, I contacted John for some help with my playing, and as a result I began the first of many trips to his house in Neston.

I spent many happy hours with John and his wife Wendy, who was always referred to as “Mum” by John, he then became known by his Philharmonic colleagues as “Dad”!

After some time John invited me to come to play in the RLPO next to him doubling the second clarinet part in Beethoven’s 9th Symphony, a memorable occasion as it was my first professional gig.

I learned such an enormous amount from sitting next to John in the many concerts we gave together with the RLPO, and from friends like Colin Pownall, then Bass clarinettist with the orchestra. Colin remained a close friend of John and Wendy and was able to continue to see them after John retired and left Neston for Manchester to be with Janet’s family, as Colin moved to work with the BBC Philharmonic.

John’s enthusiasm for the clarinet never ceased, both his son David and his grandson Oliver are very fine clarinettists, and for many years John’s friendship with   Mike Meyerowitz, then Principal Clarinet of the BBC Concert Orchestra, led to many experiments with mouthpieces, reeds, ligatures etc. I was fortunate to have had the letters that went between JF and Mike over many years, which showed how deeply they both cared about the clarinet sound. Any new versions of mouthpieces being recorded and listened back to as soon as they could.

John instilled in me the importance of listening to one’s playing, and we both shared an interest in recording machines. On my last visit to see John in hospital a few weeks ago, he wanted to hear my recent performance of the Finzi Concerto on my latest recording machine, along with looking at my latest mouthpiece and clarinet. When I had become the endorser for Leblanc clarinets, John was one of the first to swap to the Opus clarinets himself; he subsequently passed them on to his grandson Oliver.

John was also a keen follower of cricket; he sometimes had the radio on with an earpiece listening to an important match, during the less interesting rehearsals, and occasionally shouting out when a wicket fell!

I have fond memories of a visit to Llangollen with John and Wendy for another of his passions, a journey on standard gauge railway, where we both got to stand on the footplate of the steam engine.

Both John and Wendy were most passionate about their family, and were proud of all that they were achieving, when I last spoke to John he was proudly telling me of Oliver’s success, currently playing clarinet with the Philharmonia Orchestra.

John and Wendy were married for over 50 years and when Wendy passed away a couple of years ago John continued to have the same enthusiasm for news on the clarinet in the phone calls I had with him. Sadly his health was too bad for him to visit my workshop in Liverpool but he did enjoy seeing the photos of the tools and machinery that I now use, he was a great supporter of my new career direction and of my clarinet playing. His advice on was always was often concluded with the sentence ‘Well, it is better really you know” which I will truly miss hearing.

There are many examples of John’s fine clarinet playing to be heard on the many recordings he made with the RLPO through the years with Sir Charles Groves, Tod Handley and Libor Pesek, which I will continue to treasure in the years to come. The clarinet world has lost a true gentleman, I have never heard anyone speak about JF with anything less than genuine affection and respect, rest in peace my friend. 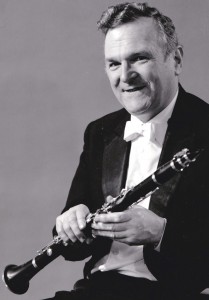