A review by Andrew Roberts 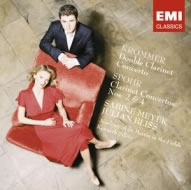 The first question this release raises is when is the recording of the earlier Krommer double concert op 35 and the Spohr 1st and 3rd concerto due? The Krommer dates from 1809 and is an approachable work and one of the very few double clarinet concertos to have stood the test of time, even if it does not have great musical depth. It is an excellent vehicle to show the virtuosity of both players and demonstrates the uncanny similarity of these two players. As teacher and pupil they inevitably should share a similar approach, but it really does take a good degree of concentration to work out who is playing at any given time. Quite an achievement as Meyer is performing on an Ohler system and Bliss is using his “French system” Leblanc/ Backun, the sound is very similar even down to the rather mannered way the trills are executed. On hearing the Spohr concertos it is somewhat easier to distinguish the stylistic variance. There is a version of the 4 Spohr concertos with Karl Leister which equally demonstrates the supreme control and Germanic approach to these works, but it wouldn’t by my choice over this recording.

Meyer does have a remarkable control of every aspect of clarinet playing with a fluidity of technique that few can match, with one obvious exception! However there is brightness to the altissimo which is rather irritating and something Bliss does not share. It also becomes clear that there is some individuality of musical ideas when comparing the approach that Bliss uses for the 2nd concerto which is arguably the better and more challenging work.Theslightly less rigid style may be more appealing to the British listener, and there is a subtle difference in the colours Bliss uses which make this an interesting CD for the clarinet players collection. The recording quality is excellent and the programme notes are informative and well written by Michael Bryant, sadly there is no information on the performers provided, surely a sign of the truly international artist. Good value as this disc is mid-priced at around £9.